A warm welcome to all of our Alumni

Hockerill Anglo European College’s Alumni Association started out as The Friends of Hockerill and is now known as Hockerill Old Scholars’ Association ( HOSA). It is a registered charity and has held several reunions and fund raising events, organised by a small committee led by the Alumni Officer, Barbara Shellard, who was appointed in 2009 when the Association was founded.

The first official reunion was held on Saturday 23rd October 2010 with over eighty former staff and students attending. The event was a great success consisting of tours around the boarding houses, music was provided by both current and former students and a reception was held in the refurbished refectory.

A number of alumni have had stands at careers events and others have been able to offer students work experience placements.  If you feel you could help in either of these ways, or would like more information, please get in touch.

Some of the money they have raised has been used to purchase a memorial brass plaque in memory of Mr Mike Ullmann, Head of the Language College, which is situated in the building that  bears his name. The Association also helped the Music department raise money to refurbish the Chapel organ with a number of concerts and a black and white film show (significantly helped by a local flooring refurbishing the floor back to its original glory at no cost).

We would love to hear from all of our Alumni and have a Group on LinkedIn which we would strongly encourage you to join, alternatively to get in touch with any news or queries please get in touch via alumni@hockerill.com

Hockerill looks forward to welcoming you back. Please take the time to keep in touch 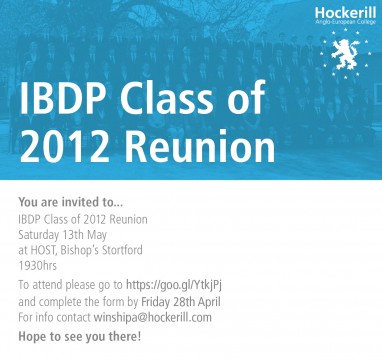 Please connect with us on LinkedIn, in addition if you could follow the link below to complete our information form that would be much appreciated.