We are delighted to introduce to you our new Sixth Form Prefect Leadership Team, their appointment was delayed by lockdown but now that they are in place, they have already met with the Sixth Form Leadership Team and are eager to get going. Congratulations to you all. 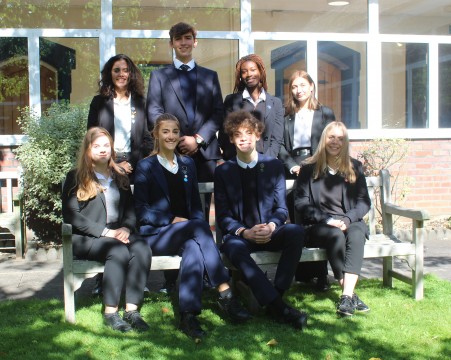 Hi! I’m Oyin and I joined Hockerill Anglo-European College in Year 12. I came across Hockerill whilst researching online for Sixth Form Colleges and after being here for a year, I can honestly say that I am really glad about my decision! I have enjoyed meeting new people, both students and teachers. Moreover, the open and friendly environment here made it so much easier which I greatly appreciate. I have also found studying the IB at Hockerill very enriching as through balancing the six subjects, CAS and TOK I find myself to be acquiring and refining important life-skills. Moreover, I have really appreciated the support of teachers guiding me through this IB journey. After studying at Hockerill I would like to study Politics, Philosophy and Economics at university which I am very excited for! Overall, I am very grateful to have met such amazing people at Hockerill and by doing the IB here I know that I will be well prepared for university education.

My name is Allan, this will be my 7th year at Hockerill, all of those years I have been a day boarder so I have experienced the warm communities of the boarding houses from Canterbury to Thames. My Higher level IB subjects include Social Anthropology, Design Technology and Psychology and my Standard level subjects are English Lit Lang, Spanish B, Maths AI.  Next year I aim to study Product Design at university. I have been involved in many clubs including the combined cadet force, The Duke of Edinburgh award, Rugby, and a bit of music.

My name is Eloise and I have come to Hockerill since I was in year 7 and am now studying the IB at sixth form. I applied to be a part of the senior prefect team because I really wanted to give back to the school. Joining in year 7 I was very shy and insecure however being a member of the Hockerill community has given me a lot of confidence and helped me grow into a confident young adult. I truly believe that the uniquely diverse community at Hockerill is unmatched and played a key factor for me when deciding to stay on for sixth form. Being surrounded with people with all different nationalities and backgrounds on a daily basis has really helped me gain an open-minded perspective on the world. Although the IB is challenging I am happy that I stayed on as it had given the opportunity for me to potentially study a wide variety of courses at university and as somebody who always changes my mind on what I want to do it has been a lifesaver to me. I am currently hoping to have a gap year to gain some work experience and hopefully go travelling and then to university within the next year or so, to hopefully study anthropology.

My name is Josie, and I am very excited to be part of the new Senior Prefect Leadership team. Having been here since year 7 I have thrived in the environment that Hockerill created for me, from the wide range of subjects I can take because of the IB to all of the trips I’ve been on including to China, South Africa, and many more incredibly valuable and amazing opportunities Hockerill has given me. As well as the things I have done locally such as an MUN conference, co-running the Amnesty club and the Mock elections being my favourite. All of these different experiences and the diverse atmosphere of Hockerill has made me excited to give back by being part of the Senior Prefect Leadership Team and has turned me into an extremely well-rounded student, I look forward to furthering my education at Uni.

My name’s Tia Sharp and I’ve been a day boarder at Hockerill since year 7, I am currently in Roding house and I love every moment! I decided to take the IB at Hockerill, because I knew it would open new doors for me and teach me invaluable skills, I wouldn’t get in such strength anywhere else. When I’m free, I enjoy playing guitar, swimming and being with my friends. For the IBDP I chose higher level Maths, DT and Business, with the desire to go to university and study architecture after Hockerill.

I’m Archie, I’m in Year 13 and have been a student at Hockerill since 2014 - as a day pupil in years 7-11, before becoming a boarder upon my entry into the sixth form. I’m hoping to go on and study anthropology and human sciences at university next year, and I really feel the interdisciplinary focus of my IB has equipped me well for the requirements of further study whilst broadening my areas of interest. Outside of the curriculum, I love playing the guitar, basketball, cycling, and music.

My name is Helena. I’ve been at the school since year 7, being in year 13 it’s my last year. Throughout my time at the college I have been involved with a variety of different clubs such as: hockey, netball, interact and the combined cadet force. At IB, my higher level subjects include psychology, English and design technology. In the future I plan to study product design at university, hoping to end up with a career in the design industry.

I am Claudia Maggi, this is my second year at Hockerill and I am studying the IB with the desire of taking Politics and International Relations at university. As Sixth Former, I chose Geography, Visual Arts and English Language and Literature at higher level and run the MUN club with other three presidents. My passions are sports (ballet particularly) and photography. I am very social and a proud Roding house girl!