On Tuesday the 19th of March we flew to Santiago de Compostela to participate in the internationally renowned San Clemente Literary Prize. This event is famous for enabling students, from all over the world, to read a selection of works from Spanish, Galician, and foreign authors before selecting their favourites and choosing the winners of this remarkable award. As a part of our Spanish B language course we were granted with the opportunity to participate and represent our School at the prestigious event.

During our stay, we were hosted by local Spanish families who helped to show us around the city and guide us throughout the many events of our visit. Isabella hit it off immediately with her associated buddy, called Lara, sharing their love of biological sciences, indie music, and pets! Meanwhile, Ines was placed in a home with a fellow IB exchange student from Russia, and their buddy called Andrea.  After settling into our lovely new homes, we awoke early on the next day, full of energy and ready to begin! Wednesday morning comprised mostly of a brief tour around the school, IES Rosalía de Castro, followed by attendance of a couple of classes with our buddies.

The events for the “Premio Literario” began a few hours later. The event started with a group discussion in the assembly hall of the school, during which students were given the chance to question the winning author of the Galician section, named Marcos Calveiro, about his novel, entitled O Xardineiro Dos Ingleses [The gardener of the English]. Afterwards, following a leisurely walk through the town, we attended a much smaller privatised press conference with the entirety of the winning nominees. Hosted in the local bank building of the town, students were able to meet and further discuss the novels of Han Kang (author of The Vegetarian and winner of the foreign prize), Pedro Mairal (author of La Uruguaya [the Uruguayan woman]) and winner of the Spanish prize), and Marcos Calveiro once again. Their series of meetings finally concluded back at the school hall, where this time we engaged with the author Pedro Mairal and deliberated over his novel.

After this grand rush, we were given some time to rest. Following a luxurious lunch in the sunshine, having tasted the most delicious Spanish burgers, we talked about some of the day’s events with our teachers. The overall consensus was that despite intricacies with the language, we both thoroughly enjoyed the discussions held. Not only did it give us the chance to learn more about the fascinating novels, but we were also able directly engage with the Spanish culture and the fascinating lifestyle. Experiencing everything from the food to the music granted us with the eye-opening experience we were waiting for, and left us wanting more! 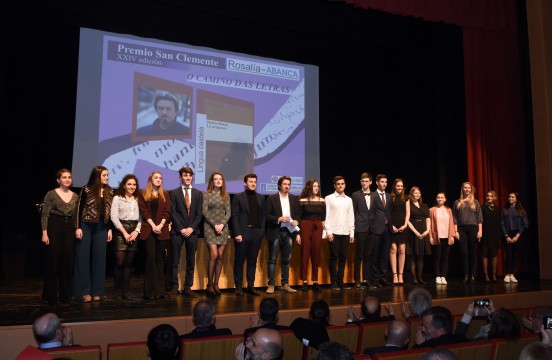 Later that evening, the official ceremony began. Hosted in a large concert hall, parents, students, teachers and alike gathered together to watch the authors present their novels and receive their awards. Most interestingly, students from all the partner schools were asked to read out extracts of the novels, as the authors presented them. Despite our initial nerves, and to our surprise, the Spanish headmaster proudly told us that we were “the best English students who have read, in years”! And thus, it was with a smile on our faces and surrounded by newly-made friends that we finished our stay at the final ceremonious feast of the literary event. With chandeliers and tapestries decorating the lively atmosphere, the group feasted upon Spanish delicacies and reminisced the wonders of their trip. Overall, it was a marvellous success. Not only did we tremendously improve our Spanish, and develop our literary knowledge and skills, we also caught a glimpse into the Spanish way of life and fell in love. Even though we have left, we will always remember the friends we made, the memories we gained, and most importantly, the amazing “Chocolate con churros”!