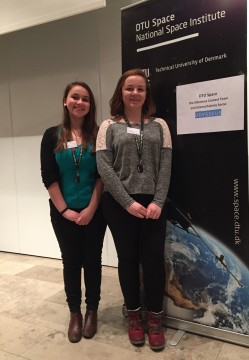 Under the title Mission Red 2030, Becky and Eleanor produced a graphical booklet detailing what it is like to settle on Mars, from the rigors of the journey to keeping fit, living, and working on the surface. They also submitted a fictional video interview set before launch and 1 hour before landing after nearly a year in space. The project was presented to three professional judges in the Mærsk Mc-Kinney Møller Science Centre in Sorø and beat teams from the UK and Denmark. They were the youngest competitors and were up against teams in Years 11, 12, and 13. The judges praised their work as the Most Artistic Project and the Most Innovative Solution before announcing them the winners. The whole trip to Sorø was organised over four days and included talks, trips, lectures, and workshops around the theme of space, as well as building rockets, riding segways, and using GPS to navigate a team member about the campus.

Becky and Eleanor will now go onto the final, held in either Brussels or Toulouse in July. There they will each be presented with a digital telescope capable of tracking any star or planet in opposition to the Earth’s rotation. The prize for winning the final will be a trip to the Guyana Space Centre in French Guyana, the location of many of the European Space Agency’s launches.

Please click here for the Odysseus press release relating to the girls' win.