Staff and students were celebrating this week after publication of the Department for Educations’ annual performance data for 2013.   The English Baccalaureate score, which the government now use as a key performance measure for GCSEs, was 84%, the highest score achieved by an English Comprehensive school.   The more traditional performance measure of 5A*-C grades including English and Maths put Hockerill in the top five, with 94%, whilst the average point score of 412.3 per student was the third highest amongst comprehensive schools in England .

The academic achievement of some of Hockerill’s Year 13 students has also been recognised in the last few days by the gaining of four conditional Oxbridge offers.  Gen Hall has been offered a place at St Edmund Hall, Oxford to read Philosophy, Politics and Economics and Harry Lukakis to read Modern Foreign Languages at Wadham College, Oxford.  Oliver Jenkins received an offer to read Arabic and Middle Eastern Studies at Fitzwilliam College, Cambridge  whilst Hannah Waring received one to read Modern and Medieval Languages at Homerton College, Cambridge. 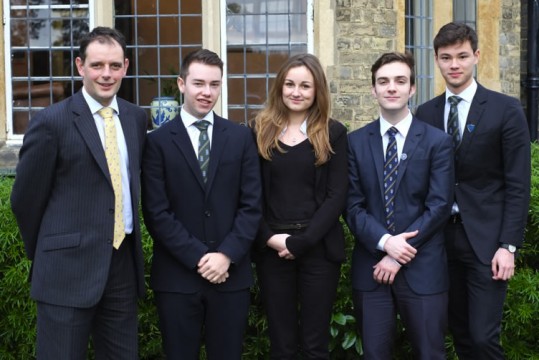 Richard Markham, Principal of Hockerill Anglo-European College, said “It is wonderful that we have the opportunity to celebrate the success of our Year 13s in the same week that the achievement of our current Year 12s is recognised.  Clearly Hockerill continues to provide an environment that fosters learning inquiry which is nationally recognised”

Signs are also good for those wishing to take up a place at a Russell Group university with a flurry of offers already received including those in the elite Golden Triangle group.

The English Baccalaureate is a performance measure which is the percentage of those who have secured a C grade or better across a core of academic subjects – – English, mathematics, history or geography, the sciences and a language.

The Golden Triangle is the unofficial name which is commonly used when referring to the Universities of Oxford, Cambridge and leading London institutions (University College London, Imperial College, LSE and King’s College London).