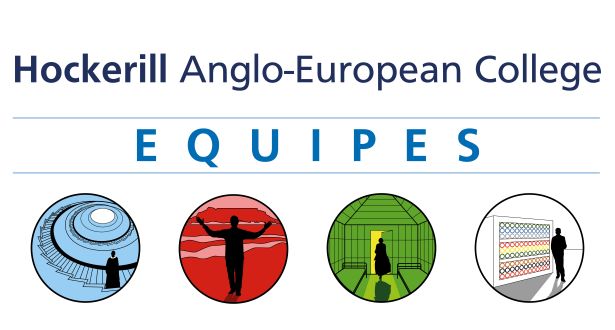 The word Equipe is French for ‘team’ and each student will be placed into one of the four Equipes. The Equipes give the students a community and sense of identity within the College and they allow their endeavours to be rewarded with points towards The Vine Cup, our overall Equipe championship.

The Vine Cup is named after the founder of the Equipes, Mr E Vine, and is awarded to the Equipe with the most points at the end of each academic year. As such, it represents the hard work and dedication of all students throughout the entire year and is the ultimate prize across the College. Every other Equipe competition contributes points to the overall standings in the Vine Cup. These were initially only sports based competitions, but have been complemented by many other types, including commendations, a quiz, and artistic competitions such as performing arts, songwriting, photography, and design.

The old trophy was replaced with a larger one in 2015 in response to the increasing importance of the Equipes at Hockerill. After leading Brunel for eight years, Mr G Dinwiddy was appointed Head of Equipes in 2021 with each Equipe now led by a pair of Sixth Formers: a Head and Deputy Head of Equipe.

As part of these changes and to better reflect the diverse community we live and work in, the names of the Equipes were renamed in 2021 to: Bader Ginsburg, Mandela, Seacole, Seacole, and Turing.

Mandela Equipe’s colour is red and the logo shows Cape Town and Table Mountain as seen from Robben Island, where Nelson Mandela was imprisoned in 1964.
Head of Mandela: Abbie Younger
Deputy Head of Mandela: Natalia Asemota-Lopez
Vine Cup wins: 2002, 2009, 2011, 2012
Seacole
Now named after Jamaican-British nurse and business woman Mary Seacole, who came to prominence during the Crimean War, Seacole Equipe was previously called Goethe.
Seacole’s colour is green and the logo is based on contemporary sketches of the British Hotel in Crimea that Mary Seacole ran during the Crimean War.
Head of Seacole: Callum Abouharb
Deputy Head of Seacole: Olivia Glover
Vine Cup wins: 2007, 2008, 2013, 2014, 2018
Turing

The most successful Equipe by number of Vine Cup wins, having won five of the first six years of the competition, Turing was originally called Pascal. Turing is now named after Alan Turing who worked at Bletchley Park during World War Two and whose work on artificial intelligence helped develop computer science as we know it today.